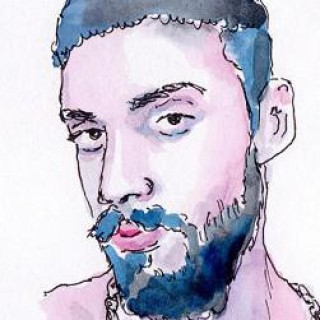 I am obsessed with water colours and have been painting since I could hold my first brush, I have a huge passion for my own work and others, I love to teach and inspeier others. I'm a very proud Dad with 3 girls and amazing wife who shares my passion for painting.

In this post, an excerpt from B. J. Foreman’s article Face Off: Figure and Ground, artist Kristy Gordon leads a painting demonstration to show how she accomplishes her unique blend of abstraction and realism. Read the full article in The Artist’s Magazine’s September 2015 issue, available now!

In my recent work, I tend to position representational figures painted with traditional techniques against abstract backgrounds created with less conventional materials and methods. My self-portrait This Too Shall Pass is a case in point.

I prepared the canvas by applying two coats of Liquitex white acrylic gesso, sanded between layers. Then, to create interesting texture, I applied thicker areas of Liquitex neutral gray acrylic gesso as well as additional white gesso with a large palette knife. Next, using Montana Gold acrylic spray paint and a stencil that I’d cut from Canson Opalux 110-lb. translucent paper, I added an image of a man’s face.

I added black liquid acrylic paint, applied with a huge metal scraper and squirted straight from the paint bottle—allowing the liquid acrylic to drip. Once that application had thoroughly dried, I used a stencil to spray on the words “Mmm Porkchops,” again letting the paint drip.

Using transparent red oxide, alizarin permanent and ultramarine blue oils, I blocked in the figure. To establish proper proportions, I used comparative measuring with the length of the head as my base. I mapped key points of the figure with dots and lines, and then connected those marks with angled straight lines. Because this self-portrait shows me swinging upside down, I had to use photographic reference at this stage (see How I Painted Myself Swinging Upside Down, below).

Using a full palette of thick paint, I established the tones and colors for the light and shadow sides of each part of the figure (head, arms, shirt). I paid attention to variations such as the reddish fingertips and blood-flushed face. I established the darkest darks but saved the brightest lights for later.

Next I developed the modeling of the large forms, rendering the head like an egg, the arms like cylinders and the body like a flattened cylinder. I made sure each form retained a distinct light side and shadow side.

Then I addressed the smaller forms (facial features and fingers) that sit on or extend from the large forms. I described these smaller forms with three planes each—a front and two sides—and then began refining their shapes. In doing this, I began adjusting the facial expression and giving definition to the hands. I was excited about the painting at this stage.

During this time I rotated the painting on the easel so that the figure was right side up as I painted (see How I Painted Myself Swinging Upside Down, below).

Working with more stencils I’d designed for background elements, I added skull and bird shapes with acrylic-based spray paint. I was having fun following my intuition but, to my dismay, the painting began taking a distinctly Halloweenish look—not what I’d intended. Disappointed, I put the painting aside for a few days.

I covered some of the birds and all but small portions of the skulls, and was relieved that the painting lost its Halloweenish feel. As I worked on the face, however, I realized that I was losing the intended expression. With the help of a mirror, I began working from life, which allowed me to experiment with facial expressions until I found the exact one I wanted to depict (see How I Painted Myself Swinging Upside Down, below.)

Because I’d lost some of my initial enthusiasm, I felt free to try anything without worries that I might ruin the piece. I masked the figure and experimented with more spray paint on the background. I also made major changes to the face, finally capturing the expression I desired for This Too Shall Pass (oil and acrylic on canvas, 40×48).

How I Painted Myself Swinging Upside Down

Painting a figure suspended upside down and swinging into the picture plane presents a challenge—especially if the painting is a self-portrait. My first step was to recruit a photographer and find a playground with monkey bars. Soon I had the necessary reference material.

In the studio I displayed my selected reference on a monitor near my easel. This enabled me to get the right proportions. Eventually I rotated the painting on my easel so the painted figure was head side up. Then I set up my lighting to replicate that in the painting and placed a mirror beside my easel. This helped me increase the accuracy of my colors and allowed me to experiment with facial expressions in the mirror. Once I’d found the expression I liked, I could paint it from life.

In this post, an excerpt from B. J. Foreman’s article Face Off: Figure and Ground, artist Kristy Gordon leads a painting demonstration to show how she accomplishes her unique blend of abstraction and realism. Read the full article in The Artist’s Magazine‘s September 2015 issue, available now!

Kristy Gordon studied television animation at Algonquin College (Ottawa), culminating her career in that field as art director of The Ren and Stimpy Show. In 2004 she turned her attention to creating and studying fine art. Since that time she’s earned a bachelor of fine arts degree in drawing and painting from the Ontario College of Art and Design (Toronto) and a master of fine arts degree in painting from the New York Academy of Art. Her work appears in more than 500 public and private collections worldwide, and her awards include Elizabeth Greenshields Foundation Grants (2010 and 2013), finalist placement in the 2013 Kingston Prize, and an Exceptional Merit Award from the Portrait Society of America (2014). Dacia Gallery (New York City), Grenning Gallery (Sag Harbor, N.Y.) and Cube Gallery (Ottawa) represent her work. Visit her website at kristygordon.com.

I am obsessed with water colours and have been painting since I could hold my first brush, I have a huge passion for my own work and others, I love to teach and inspeier others. I'm a very proud Dad with 3 girls and amazing wife who shares my passion for painting. View all posts by maxmallie